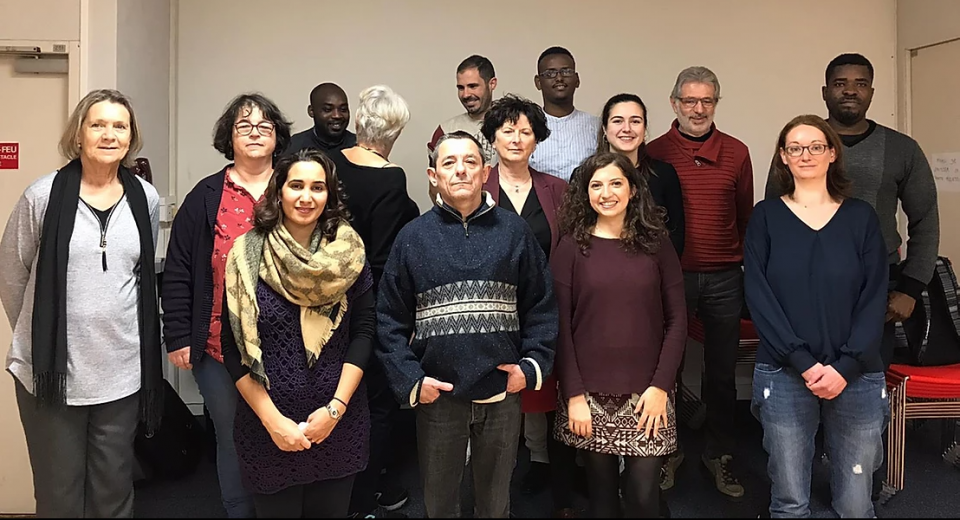 The Artem project is led by the association Pistes Solidaires in partnership with eight organisations from seven European countries. The aim of this project is to create a link between migrants and locals within a territory, through the exchange of non-market services. Aline, psychologist, school director and now retired, participated in this project: she tells us about her experience.

Pistes Solidaires: Hello Aline, can you introduce yourself and tell us how you got to know the Artem project?

I was curious about the association and its philosophy. When I was introduced to the Artem project, I found it very interesting that it was an equal project, and not an assistantship, as is often the case. I find that the idea of setting up an exchange between applicants and offerers is really positive, it's a win-win situation. It's an integration project, a welcome project, but it's based on competence, and all participants are equal.

Pistes Solidaires: How did the training sessions go?

We received the trainings at the beginning of January, after the Christmas holidays. The training took place over a week in two separate groups: the migrants' group in the morning, and the locals' group in the afternoon, except on the last day when the two groups met. During the training, we did a lot of games and role-playing on subjects such as prejudices or emotions, led by two trainers. It was dynamic, convivial, even for me who does not open up easily. I learned a lot of things.

Pistes Solidaires: What did you think of the digital story-mapping activity?

On the penultimate day, we prepared our story-mapping in advance, before moving on to the software. It's not so easy to present your journey in a clear and concise way. The use of an interactive map allows you to visualize your own story and identify the steps. Moreover, thanks to the support, those who listen can easily follow. Friday was dedicated to the presentation of the life path with the software. All the participants were equal, everyone has a story to tell, even if for migrants, being able to explain their journey is vital, especially when they apply for asylum.

Pistes Solidaires: Who were the other participants in the training?

Among the local participants, I was the only one who did not belong to an association. The other participants were members of the association L'Accorderie, Pistes Solidaires' partner for the project. They already knew a little about the system of exchange of services at the local level. For the group of migrants, it was very diverse: there was a spanish man recently settled in Pau, a Libyan woman who has been living in France for several years already, and three people who arrived a few months ago, from the DRC, Sudan and Somalia.

Pistes Solidaires: Have you ever exchanged services with any of the people you met through this project?

For the time being, I have not yet realized an exchange of services. After the training, we all met again during a convivial day in the offices of Pistes Solidaires in February, with some students from the university. We had a very pleasant time. I exchanged my contact with Adam, who comes from Sudan, and I offered to help him to pass his driving licence, in exchange for a hand for some work at my house. We were supposed to meet again when I came back from my holidays, but with the containment measures, we had to postpone. But that's only postponed! I'm looking forward to the launching of the digital platform that will be able to centralize offers and requests for services. It will be very practical for the future.